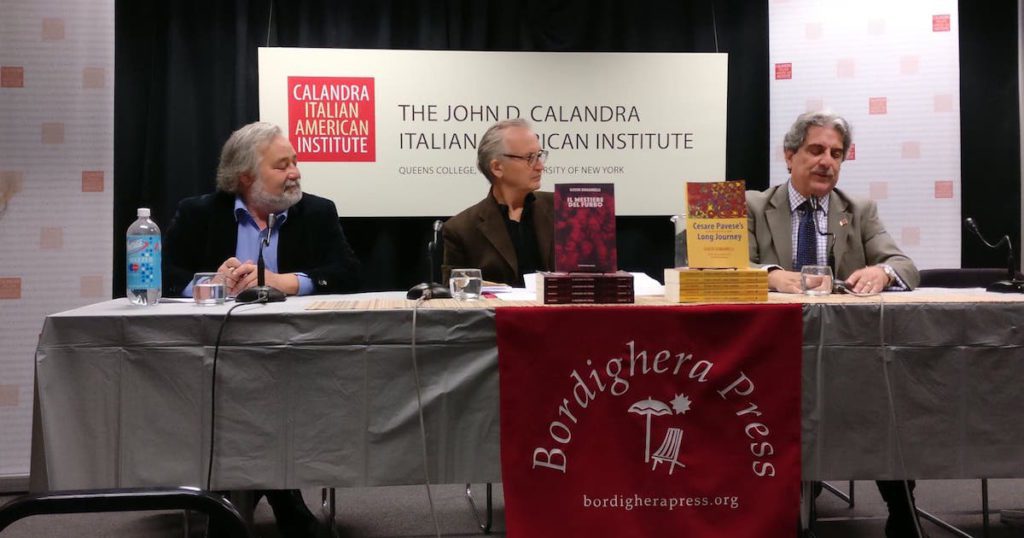 With this interview with Mark Pietralunga, we launch Dialogues with Pavese, a themed column on Pavese’s scholars around the world. 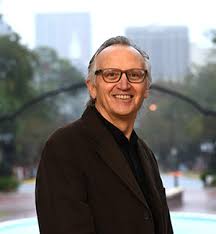 Mark Pietralunga is the Chair of the Department of Modern Languages and Linguistics at Florida State University, Tallahassee, USA, where he is Professor of Italian. He obtained his PhD at UC Berkeley and specialized in 20th century Italian Literature and Culture. He published several (and diverse) studies on various aspects of Cesare Pavese’s work. Among these, An Absurd Vice: A Biography of Cesare Pavese by Davide Lajolo (New York, New Directions, 1983), an English translation of the biography Il vizio assurdo by Davide Lajolo; Prometeo slegato: Pavese traduttore di P. B. Shelley (Torino, Einaudi, 1998); Cesare Pavese and Anthony Chiuminatto: Their Correspondence (University of Toronto Press, 2007); and his latest study Cesare Pavese: A Critical-Analytical Study by Giose Rimanelli (New York, Bordighera Press, 2019).

Let’s start from the end. You recently presented in New York a study on Pavese by Giose Rimanelli, who met Pavese before coming to the US where he became a professor. Can we consider this presentation and this study a reward, both for Pavese (who tried to join the US and never succeeded) and Rimanelli (who wasn’t able to publish his study)?

I’m not sure that I would categorize the presentation or the publication of Rimanelli’s book-length study on Pavese as a reward. Despite the over half century since Rimanelli’s attempts to publish the book manuscript both in English and Italian, there is still much to learn from this study as it pertains to Pavese but also as it relates to its author, who left Italy soon after the publication of a highly controversial collection of essays, Il mestiere del furbo, in which he denounced the patronage, lobbying barriers, and political machinations of the contemporary Italian literary milieu and cliques.

What stands out in Rimanelli’s study of Pavese is his intellectual independence and an analysis that remains critically valid after so many years. Moreover, as I noted in the introduction of the study, a distinguishing feature, particularly from other criticism in the 1950s and early 1960s, are Rimanelli’s enlightened references to foreign works and authors. The inability to have the monograph published in the United States appears to reflect the limited critical and popular recognition of Pavese’s works in the years that lead up to and immediately follow Rimanelli’s study.

Rimanelli’s correspondence with Pavese biographer Davide Lajolo and Elio Archimede, literary editor of the Asti weekly La nuova provincia, included as an Appendix to this study, offers valuable insight into the state of Pavese studies in the United States at the time and how, with this book-length study, he hoped to gain the attention of a serious reading public. 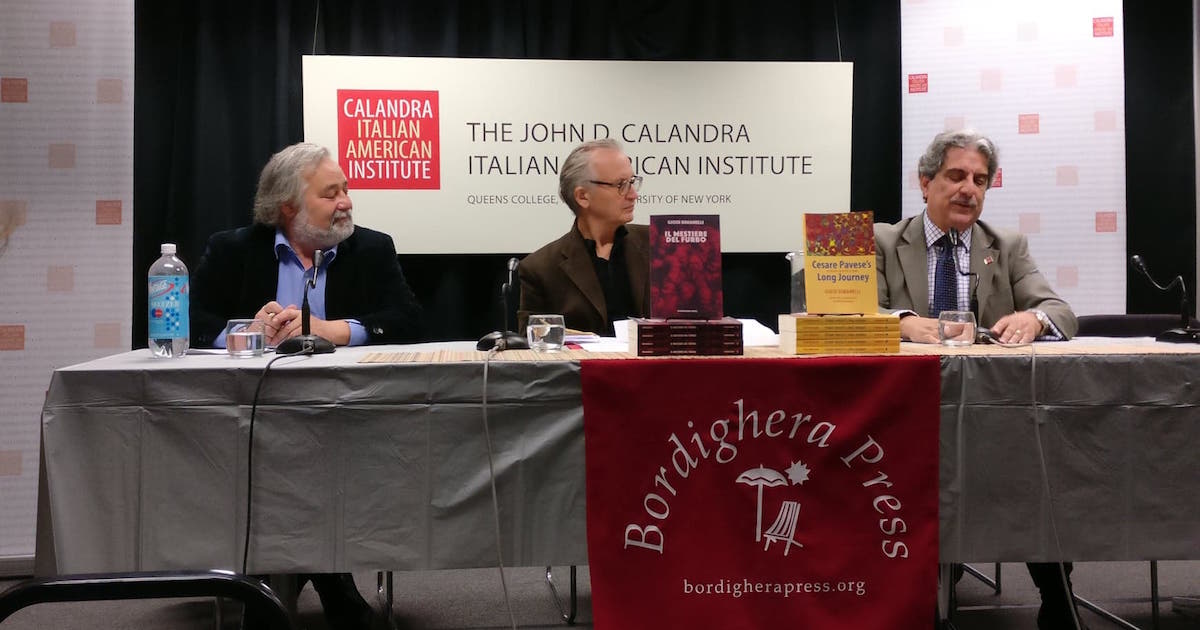 Pavese and the English and American literatures

You edited the correspondence between Pavese and Chiuminatto, and published a study of Pavese as translator of Shelley. What were the aspects of these literatures and cultures that Pavese absorbed and then used as writer?

The translation of Shelley’s Prometheus Unbound reveals that, already in 1923, when Pavese was just fifteen years of age, his ability to understand English was quite impressive. This translation sheds light on the first steps of Pavese as translator. We learn from his early translations that the activity of translator was an irreplaceable and arduous exercise for someone who was in search of a style and an identity as a writer and craftsman. In fact, Pavese expressed in his personal reflections in those early years the valuable role that translation would play in his apprenticeship as a writer. 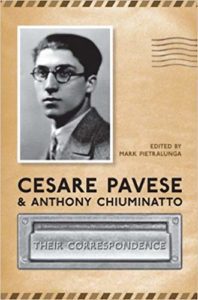 With the discovery of Walt Whitman a few years later, Pavese attempted to transfer the individualism and idealism of the English Romantic poet onto a modern landscape. With this transition, we also distinguish Pavese’s interest in a more simple and direct language.

Pavese’s rich epistolary correspondence with his Italian American friend, the musician and educator Anthony Chiuminatto, constitutes a fundamental stage in Pavese’s linguistic and literary apprenticeship both as a writer and translator. The letters offer an eloquent testimony of Pavese’s joy of discovery of America, his fascination with the American language (most notably American slang), and his insatiable curiosity to learn about American literature and culture.

The epistolary exchange reveals the valuable role Chiuminatto played in informing Pavese of the new literary works that appeared in the United States, in sending books that were unavailable in Italy, and in explaining and translating American slang and idiomatic expressions from the novels of Sherwood Anderson, Sinclair Lewis, William Faulkner, as well as others.

Studying Pavese in the US

Is Pavese an author that Americans still read and study or is he disappearing from the radars of Italianists?

Pavese is an author that continues to be studied by scholars and, although he is still read, he has not had the success among the general reading public that he deserves. That said, Pavese does remain on the radar of the bi-weekly literary magazine, the New York Review of Books, an important point of reference in the United States for the general dissemination of literary culture. Over the years, the magazine has demonstrated a keen interest in Italian literature, with particular attention to Cesare Pavese. The New York Review of Books book-publishing division has also published selected works by Pavese since it was founded in 1999.

In recent years, Pavese’s essays on American literature and his diary have also been published. It should also be noted that there has been a very positive reception to Pavese’s poetry to the point that he is among the most widely read of all 20th century Italian poets after Montale. I might add that the translations of his poetry have been of very high quality, which has not always been the case for many of his novels, short stories, diary and letters.

Do you still teach Pavese at Florida State University?

Yes, Pavese’s works remain an integral part of several of the courses I teach both at the graduate and undergraduate levels. For example, his novels La casa in collina and La luna e i falò are regularly included in my courses on the twentieth century narrative, the postwar novel, and Masterpieces of Italian Literature in Translation.

Additionally, I teach Pavese’s poetry and short stories in my survey course on Italian literature and I includes selections from his La letteratura americana e altri saggi in my course “Views from Abroad: America in Italian Literature and Film.” Let me also add that students’ interest in Pavese’s works have not wavered over the years, as they respond very positively to his novels, short stories, poetry, and essays.

What is the main source of your interest in Pavese?

My main source of interest stems from Pavese’s profound relationship with America, dating back to his thesis on Walt Whitman, and how he found in in America a vehicle to free himself from an imposing tradition and discover a new way of living and a new means of expression.

I was fascinated by his brilliant translations and excellent essays on American authors that articulated an awareness of the linguistic experimentation taking place in the United States in the 1920s and 1930s and helped contribute to the birth of the American myth and to the deprovincialization of Italian culture. From there, my focus has been primarily on his early translations of both English and American writers.

The modernity of Pavese

Pavese was a unique intellectual in 1930s Italy. What aspects of his personality are still appealing and interesting, nowadays?

Given the vast scope of Pavese’s intellectual interests and activities, there is still much about him that remains appealing today. As I mentioned previously, Pavese’s poetry has garnered particular interest in recent years, as it has been a staple in twentieth century Italian poetry anthologies in translation. However, the interest does not stop there. There remains a great deal of interest regarding the impact and influence of American literature and culture in Italy during Fascist rule and Pavese, given his role as a leading Americanist at that time, figures prominently in this discussion.

Tim Parks’ review of Jane Dunnett’s neglected book The ‘Mito Americano’ and Italian Literary Culture Under Fascism in the New York Review of Books a couple of years ago is a case in point. Additionally, the importance and relevance myth and mythology have had in Pavese’s writings continue to offer scholars new areas of exploration, as do questions of rootlessness, exile, and identity.