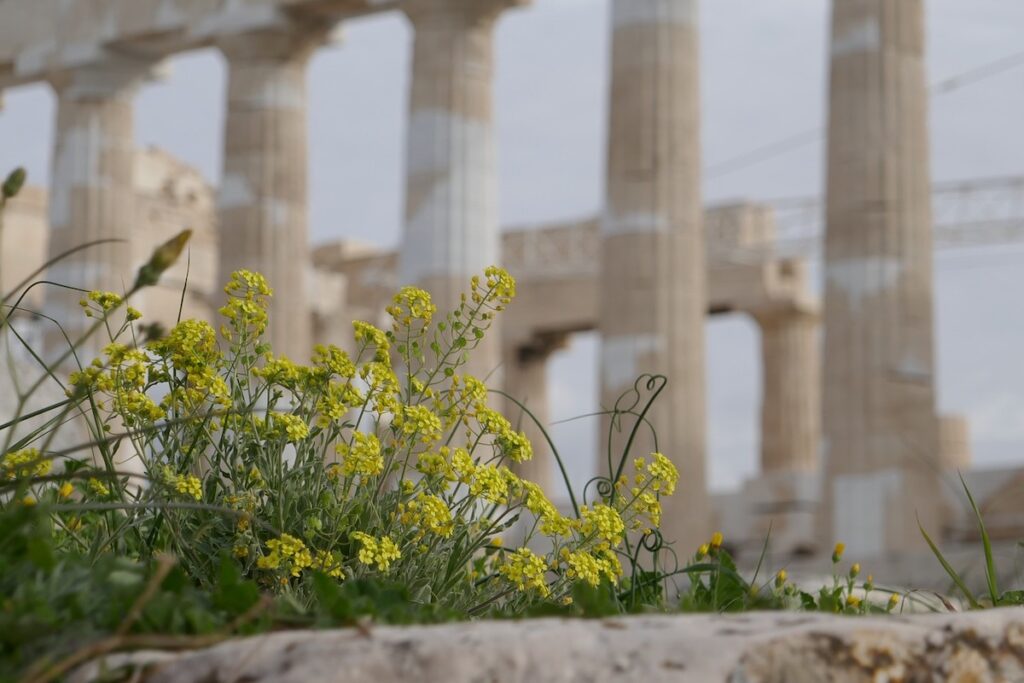 Translation as a way to broaden the journey of a text: read our interview with professor Marie Fabre, who has recently published a new translation of Dialogues with Leucò into French. 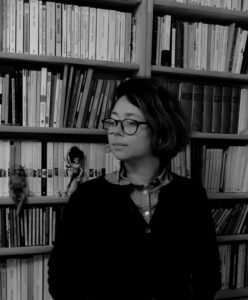 Professor Marie Fabre teaches Italian Studies at École Normale Supérieure in Lyon (France). She held a PhD in Italian Studies from the universities of Grenoble, Paris, and Pisa (co-tutoring with Christophe Mileschi and Carla Benedetti). Her dissertation focused on a subject that is still very relevant for her: the connections between literature and politics in the works of great 20th-century Italian authors (Vittorini, Calvino, and more recently Pasolini and Morante). Her passion for writing and translation led her, during her PhD years, to translate two texts by Amelia Rosselli; after that, she also translated Vittorini, Pasolini, Volponi, and Moresco as part of collective translations. Research and translation remain for her parallel activities, distinctive but at the same time nurturing each other. Although working in academia is complex, she still believes that this job is built on the balance of research, translation, and writing. In 2021, she translated into French Pavese’s Dialogues with Leucò under the title Dialogues avec Leuco (edizioni Trente-Trois Morceaux).

Why did you choose to translate Dialogues with Leucò?

To be honest, I have the impression that it was not me to choose it, but the book itself that chose me. When I discovered it as a PhD student in Bologna, during prof. Bazzocchi‘s seminars, I began translating pieces of them, as I was used to do with all the texts that fascinated me. In particular, I remember that I was attracted to The Lady of The Beasts (La belva): I worked quite a lot on it for myself, “gratuitously”, without even considering other translations (also, because I was living in Italy). Four or five years later, a choreographer asked me to translate some of the dialogues for a contemporary dance show. After having worked again on them, I did not feel ready, I wasn’t sure about the results I could achieve, and I didn’t complete the task. Some years later, I met with Paul Ruellan and Vincent Weber, the two publishers behind Editions Trente-Trois Morceaux. They do a very good job and proposed me to translate this text, whose reading resulted for them in a choc. Again, I hesitated quite a lot: this is such a difficult and impressive text, and it was the first time I was asked not to translate but to re-translate it. These are two different processes: when a text is re-translated, a new proposal is necessary. I accepted only when I figured out this proposal in my mind.

Are there any other French translations of the Dialogues? What are the differences between those and yours?

Before mine, two translations of the Dialogues have been published. The first was made by André Coeuroy, while the second by a group of translators led by Mario Fusco. Moreover, the subtitles in Danièle Huillet and Jean-Marie Straub’s films, inspired by the Dialogues are also relevant. In my opinion, both translations have pros and cons; mine, too, for sure. No one of these translations is wrong or unnecessary: basically, a text like this allows many different possibilities, in the past and in the future. Coeuroy’s translation maintains a certain charm, it partially recreates some of its poetic nuances, but unfortunately it also contains mistakes about the words’ meaning, as well as some obscure passages. Fusco’s translation is the result of years of efforts by some of the most relevant French italianists: it is very logical and coherent, and without mistakes, but it has always given me the impression of losing some of the poetry and the mystery of the original text. My conclusion about them was this: Pavese’s language was expressed too classically, and in the end, this leads to an accidental flattening of this language’s eccentricity. This process eliminated the different registers, linguistic levels, accents, unexpected flashes, hidden verses that form a language which is monotonous and monolithic only at its surface. I have tried to maintain both the most inventive solutions, at the poetic level, and a more “modern” experimentation on the integration of the spoken language in the elevated prose of the text. The difference between mine and the previous translations originates from a molecular approach to the text: for me, it was fundamental not to propose something different at all costs. I avoided forcing or twisting the text only to propose an original translation and distinguish mine from the previous ones. In conclusion, it is always a matter of balance, finding the right position between deviation and the most correct tone.

Dialogues with Leucò was the book that Pavese loved the most, but it was also the least understood by critics. What has been the reception of this book, and Pavese’s, in France, during the years?

The reception has been extremely poor: for this reason, this new translation makes even more sense. First of all, we need to say that the book is impossible to find anymore: Coeuroy’s translation, published by Gallimard press in its famous “collection blanche” (white collection), has been out of stock for years. Moreover, it has never been reprinted, not even in paperback format. Fusco’s translation has been published as part of Pavese’s “Quarto”, a volume edited a few years ago by Martin Rueff containing almost all of Pavese’s oeuvre. Sure, there were some French scholars who discussed the book, starting with that group of translators who worked on it in the 1990s, but it remains so far the least read of Pavese’s book in France. Not even the most educated readers know it. In Italy, I believe that the studies on Pavese and myth have been fostered – although not so recently – by Furio Jesi, who influenced the critics for a long time, but Jesi has not been translated into French. Nevertheless, the not so numerous readers I met who had read this book almost fortuitously were overwhelmed by its power. Honestly, to me this is what matters the most in a translation: more importantly than a critical reception, I care that the book might reach new readers and travel more broadly.

How did you work: was it a long and difficult work? Which resources did help you?

Talking about the concrete work of a translation is always very difficult, and often boring. Yes, it has been very long. As I mentioned, I accomplished a fundamental part of the work before I even started to translate it, when I decided what to do, when I imagined and desired the Dialogues in French under a new form. I have already read Pavese’s work. I put this book into my syllabuses, reflecting on it and – especially – reading it with and for my students (in a translation workshop at Paris 8 University, too). When I have to translate a text, I always like to confront myself with different perceptions of it: at least, this happens during a first phase, because I then must choose, close the different possibilities, crystallize a single way of reading. About the “writing” section there is not very much to say: you simply work, writing. Then, in the phase of re-reading, the process re-opens again, reaching other people. I asked different people to read some of the dialogues, each time asking them to answer specific questions. I asked some friends, who are specialized in ancient cultures, suggestions about the names of gods and goddesses; I asked my partner, an historian, to read them through a historian gaze; finally, an italianist and someone who cannot speak Italian provided me with more “literary” perspectives. And all of this happened before I even started the editorial process. What scared me the most was not the stylistic and poetic difficulties of the text, but on the cultural side its references to the classical culture: I was afraid I could miss or misinterpret some specific references. It is in this field that I had to do the most important documentary efforts.

After you read and translated them, do you have a favorite dialogue?

This is a good question. The strength of the Dialogues resides in this: I have been reading them for the last 15 years, and they have been talking to me differently according to the different periods of my life. It is such a rich text, depicting existential situations and putting symbolic materials at stake, that one can always address it. If, when I was younger, my favorite dialogue was The Lady of The Beasts (La belva), in this moment of my life I prefer Sea Foam (Schiuma d’onda). During the last year, when a dear friend passed away, I found consolation in The Friends (I due). In presenting this text to my students, I always try to make this clear: the text might seem very difficult (French audience does not have the same classical training and roots, or feel so close to this culture as Italians do), but it might also speak directly to everyone, reaching deep and always different emotions if we let ourselves go to a specific reading. What I liked the most about the translation was to focus on dialogues that I have read less than others, until now: dialogues that I haven’t yet perceived as “my dialogues”. I discovered, and plunged into passion for, the central nucleus of “ethnological” dialogues: The Werewolf (L’uomo-lupo), The Bonfires (I fuochi), and The Guest (L’ospite). They have also been very interesting under a linguistic-stylistic point of view for my translation.

“Un Pavese ci vuole”: this misquotation from a very famous passage from The Moon And The Bonfires was the title of a series of video-interviews I conducted with the director of Fondazione Pavese, Pierluigi Vaccaneo. Seventy-two years after Pavese’s suicide, do we still need him? And, whether yes or no, why?

I think I said this in my previous answer. Today, it is clear that we still need him because even on social media hundreds of young people passionately talk about him, exchanging his quotations and readings. I know that you, Iuri, worked on this phenomenon, and I find it very important and meaningful: a work of literature must travel, meet with new historical, linguistic, existential situations. This book in particular stands the test, despite the high and lows of its academic reception. From what I am saying, it is very clear to understand that I love Pavese for this reason, too: he speaks to adolescents, it is possible to read him with a fresh gaze, a sensible-subjective reading which is also immediate. At the same time, it can take years to study his cultural relevance and his sources, to understand his human path and to enter his drama. It might sound banal to repeat this, but Pavese remains a classic because of these multiple possibilities of reading him: with him – in the words of Calvino – “the world continues beyond the limit of the page”.