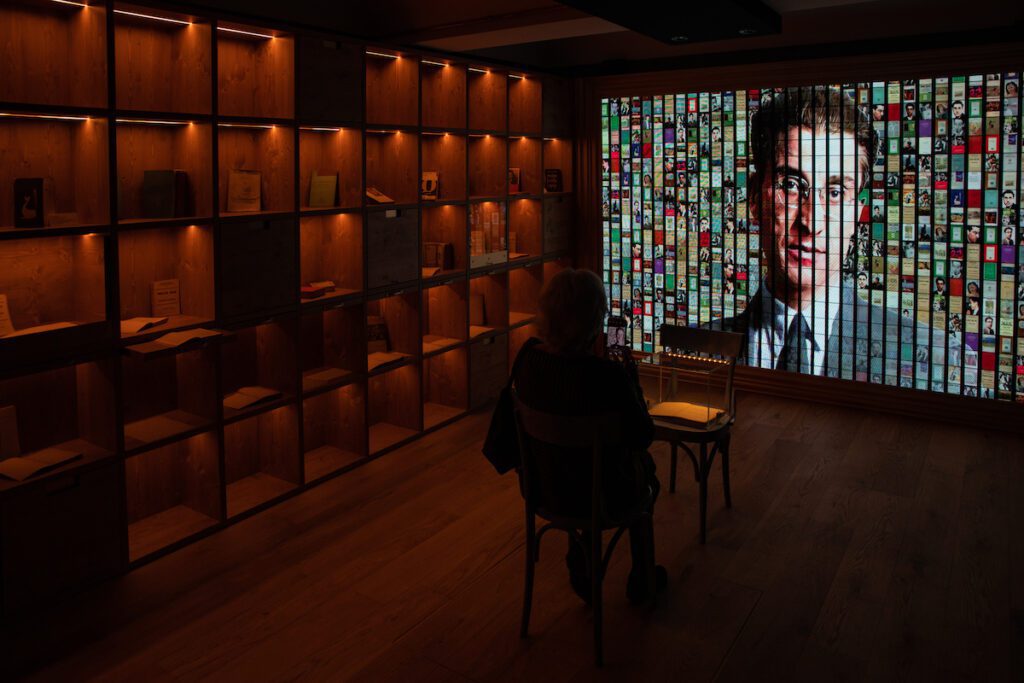 Dialoghi is the new room of our museum with a series of Pavese’s unpublished materials donated to Fondazione Cesare Pavese by the Molina and Vaudagna families.

Annotated books, letters, manuscripts, newspaper articles with notes and underlinings, postcards, draft short stories: these are the documents – both published and unpublished – that constitute the Molina and Vaudagna collections, latest acquisition of Fondazione Cesare Pavese.

Such material is now available to the public, adequately preserved at the Pavese Museum and promoted thanks to an innovative multimedia set-up. A big opportunity that makes Fondazione Cesare Pavese a reference point in Italy and the world for the preservation and dissemination of published and unpublished material related to the writer.

Dialoghi (dialogues) is the new room of the Pavese museum, inaugurated during the Pavese Prize 2022 and designed around the copy of Dialogues with Leucò where the writer left his last message. A name meant as an invitation to start a dialogue with the work and the poetics of Cesare Pavese, surrounded by his books, words and landscapes.

It is in this totally renovated space that the material donated to Fondazione Cesare Pavese by the Molina and Vaudagna families – quite close to the writer for personal and professional reasons – has found a new home.

The project was realized with the contribution of the Municipality of Santo Stefano Belbo and Fondazione Cassa di Risparmio di Torino. Its modular design is meant to welcome future donations by other families who are in possession of Pavese’s unpublished material and other documents related to the writer,

Dialoghi is dedicated to the memory of Maurizio Cossa Majno di Capriglio, Cesare Pavese’s grandnephew and board member of Fondazione Cesare Pavese, who prematurely passed away in February 2022.

Oreste Molina, technical director at Einaudi publishing house, a close collaborator and a great friend of Cesare Pavese, was in possession of a series of books belonged to Cesare Pavese that his family chose to donate to Fondazione Cesare Pavese.

It is a collection of texts of American and English literature on which Pavese worked tirelessly: their pages are filled with unpublished notes, underlinings, comments that allow to retrace his translation efforts. Iuri Moscardi, PhD Candidate in Comparative Literature at the Graduate Center of the City University of New York and curator of Dialogues with Pavese, our themed column on Pavese contemporary critique, is currently investigating this collection. His research will result in an academic paper to be published in the USA, whose preliminary findings were presented during the 2022 Pavese Prize.

Giuseppe Vaudagna was one of Pavese’s classmates at Liceo D’Azeglio in Turin. Their friendship is witnessed by a series of documents that his family donated to Fondazione.

The collection is made up of published and unpublished personal material, signed by Cesare Pavese through which the writer brought Vaudagna up to date on his works, professional activities and personal and private issues. The collection also includes newspaper articles, filled with notes and underlinings, draft short stories, postcards and other letters. These material offers a significant perspective on the personal life of the writer and on his private relationships with friends and classmates (see for instance, his letters to Remo Giacchero and Tullio Pinelli), which had a great influence on his intellectual career.

December 25th and January 1st: closed
24 and 31 December: morning only