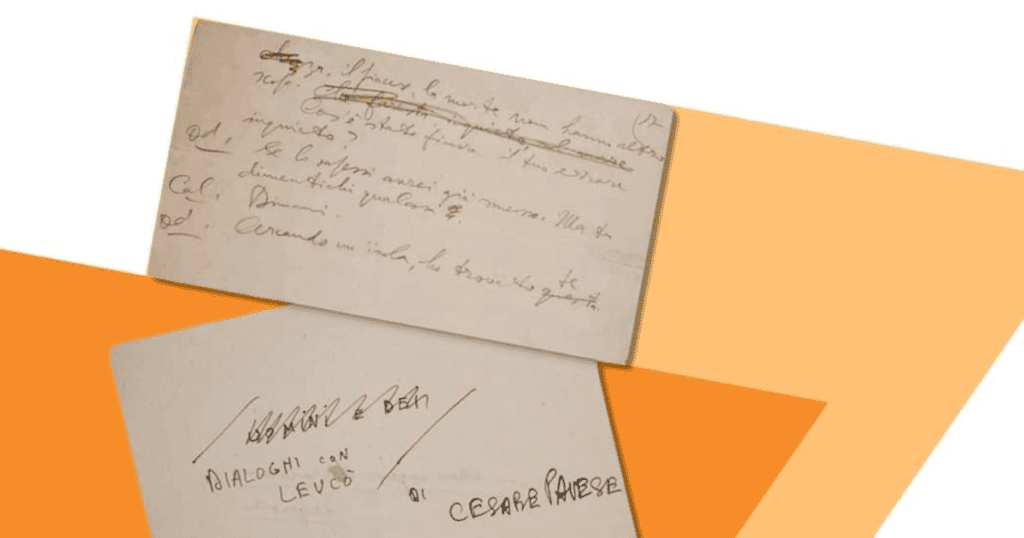 Dialogues with Pavese: feature from Sorbonne

The international conference “Cesare Pavese. L’écriture, la langue, le style” took place on 30 September and 1 October at the Maison de la Recherche of the Sorbonne Nouvelle University in Paris, organized by professor Christian Del Vento and Daniela Vitagliano, PhD (whom I have already interviewed for this column). The focus of the conference was on Pavese’s poetics, discussing his role as a writer and his influence on 20th century Italian literature. The speakers analyzed Pavese’s language and style, his writings and his rewritings, considering new studies, editions, and translations of his works published in Italy, France, and the USA in the recent years.

The conference started with a roundtable on new editions and translations. Together with me, the participants were professor Francesca Belviso (University of Picardie Jules Verne), professor Marie Fabre (École normale supérieure de Lyon) and professor Gabriele Pedullà (University Roma Tre), with the moderation of professor Del Vento.

Professor Belviso presented her recent edition of Pavese’s Taccuino segreto, a series of notes found in the 1960s by Lorenzo Mondo that he published on the newspaper La Stampa in 1990 (he first made copies of them and then gave the original to Italo Calvino). In these notes, Pavese showed inexplicable admiration for Nazis and unbelievable dislike for anti-Fascists: they still represent a thorny matter. Is it correct to publish them when Pavese and Calvino kept them secret? Do we really have to consider Pavese a model of anti-Fascism only because of his friendship with many of the most prominent anti-Fascists? In her critical edition, Belviso proposes a possible interpretation: the Taccuino allows to explore Pavese’s deepest thoughts and constitutes part of his intellectual biography of “aesthetical a-Fascist and ethical a-politician”. It needs to be read in comparison with his diary, Il mestiere di vivere, and it mentions Vico, Dostoevskij, Shakespeare, and above all Nietzsche. According to Belviso, we can trace Pavese’s apparent admiration for Nazis to his interest for German culture, which nobody has mentioned so far (in particular, to Pavese’s translation of Nietzsche’s Will to Power in those same years). After Pavese as an enthusiast of America (1930s) and before his passion for Greek classical culture (1945-50), Pavese could thus be regarded as an enthusiast of German culture in 1935-45.

Professor Pedullà presented the collection of Pavese’s books that he is editing for Garzanti: he edited Prima che il gallo canti and chose, for the other books, scholars not specialized on Pavese so as to make Pavese more international and less tied to traditional interpretations. These are “Catholic editions”, meaning that the text is accompanied by long introductions and notes. According to Pedullà, the only aspect of Pavese’s psycho-biography that nobody has studied, yet, is his technique of building his novels. In particular, he analyzed how – combining them into Prima che il gallo canti – Pavese changed the sense of The Political Prisoner and The House on the Hill.

Marie Fabre presented her recent translation of the Dialogues avec Leuco (Trente-trois morceaux). She is not an expert of Pavese and privately translated the book when she was 20 (as Pivano did with Spoon River). Her translation is a “protestant” edition, meaning that it only includes the original text without notes, made for non-specialists and containing the indexes and schemes written by Pavese himself. The biggest difficulty she encountered was with Pavese’s polysemy and the Greek names, written without following the Classical pronounce.

Finally, I showed the guidelines which I am following in editing a new English translation of Il mestiere di vivere, which will be published in the Lorenzo da Ponte Italian Library of the University of Toronto Press. So far, English speaking readers could read only one translation, which kept the cuts made by Massimo Mila, Italo Calvino, and Natalia Ginzburg for the first Italian edition in 1952. Among the most relevant issues that I still have to figure out: how to translate the word ‘mestiere’ and how to dispose the text to make it accessible for all readers.

The conference was then divided into four sessions: the first two, during the first day, focused on specific books by Pavese. In the first session, “Language and Style in Pavese’s Early Works”, professors Valter Boggione (University of Turin) and Michela Rusi (Ca’ Foscari University, Venice) chose Paesi tuoi (The Harvesters) and La spiaggia (The Beach), respectively. Professor Boggione analyzed characters’ names and proverbs to show Berto’s attempts to feel superior to Talino, his peasant companion. Berto defines farmers through their role and not with their names and considers Talino an inoffensive ox, while in the final Talino becomes a furious bull, reversing the Minotaur’s myth. According to professor Rusi, the short novel that Pavese disregarded – but, at the same time, considered important – can be read as a search for ripeness. The protagonist Doro, unlike Pavese, realizes that ripeness means accepting his adult life as a married man and soon to be father; for this reason, he detached himself from the symbol of his childhood (like the hills where he was born).

In the other session, “The Frontiers of Writing, the Frontiers within Writing”, Angela Francesca Gerace, PhD (University of Calabria) showed the shift from logos to myth in the last works of Pavese by analyzing their lexicon. Daniela Vitagliano, PhD, showed the relevance of the myth as a structural element in the Dialogues with Leucò: the form mirrors the content and Vico’s mythological paradigm is transformed into a narrative style made of metaphors and repetitions, giving unity to the book. The writer Andrea Tullio Canobbio focused on Dodici giorni al mare, a diary of a boy scout trip Pavese made in 1922, and the short poem Amore indiano (1923), published by Galata: they show how disorganized but rich were young Pavese’s readings.

During the second day, the sessions were more thematic. In the first, “(Again) between Myth and Logos: Lexical and Thematic Analysis”, Lorenzo Marchese, PhD (University of l’Aquila) showed how Pavese’s predilection for young and adolescent characters mirrored an idea of ripeness as unbalanced between inactive, prematurely old characters and kids, who are active only because they don’t have any knowledge of the world. Massimiliano Cappello (PhD student at University of Milan) analyzed the important difference between the two verbs “succedere” and “accadere”, both meaning “to happen”, in Pavese: micro stylistic issues that show – being the former an active verb and the latter a passive one – different approaches in telling and writing (for Pavese, “accadere” is the verb of destiny). Riccardo Gasperina Geroni, PhD (researcher at University of Bologna) dealt with the problem of guilt in Pavese, which so far has been explained only through biographical interpretations. By analyzing the guilt expressed by some of Pavese’s characters through Paul Ricoeur’s philosophy, he considers Pavese’s guilt as tragical, in other words unavoidable, and corresponding to the discovery of our own humanity: it is not a failure but a regression within the myth to come back to the innocence of childhood.

Finally, in “Global (re)visions of Pavese’s Oeuvre: Rewriting, Rewritings” I discussed some of the twitterature projects that – between 2012 and 2013 – were focused on the rewriting of The Moon And The Bonfires and Dialogues With Leucò. I showed how the digital social reading projects #LunaFalò and #Leucò – relying on rereading and rewriting – constitute an innovative form of reception of the text and how they took advantage of Digital Humanities’ cornerstones.

The conference was a great opportunity to gather scholars of Pavese: people participated in person and online. All the presentations were very inspiring, and they were followed by interesting debates and discussions. More importantly, they showed one more time the relevance of Pavese as a man and an intellectual: his thoughts and his works continue to be a source of discussion and study